Buyers flock to the surf

Courier Mail, HOME - Seventeen apartments, including four of seven penthouses, at a Coolum Beach development were snapped up by buyers within two weeks of hitting the marketing. Seventeen apartments, including four of seven penthouses, at a Coolum Beach development were snapped up by buyers within two weeks of hitting the marketing.

In total, 34 sales were recorded at Drift by Mosaic within a month of it’s launch in late October. Mosaic Property Group managing director Brook Monahan said the response to Drift had been amazing, particularly from locals.

“They’re well aware of what a special place Coolum is and they’ve been waiting patiently for a development of this caliber for a long time,”he said. “We are thrilled that Drift is meeting the expectations of local buyers.”

The $52 million Drift by Mosaic will rise on a north-facing oceanfront site, and comprise 56 luxurious one, two and three-bedroom apartments, three sub-penthouses across four levels. Three sub-penthouses and one penthouse have already been sold. Buyers from the Sunshine Coast and Brisbane have been the biggest supporters.

Drift will be Mosaic’s biggest Sunshine Coast project to date, with its other two debut sites Cyan and Solis, both at Kings Beach, sold out.

Construction at Cyan and Solis has begun, with construction due to start at Drift in February 2018 and completion set for May 2019. Each apartment in Drift will have high ceilings and large windows to let in natural light, optimise ventilation and enhance the sense of space. They will each have a gourmet kitchen with stone counter tops, island bench and designer appliances including induction cooktop with undermount rangehood. 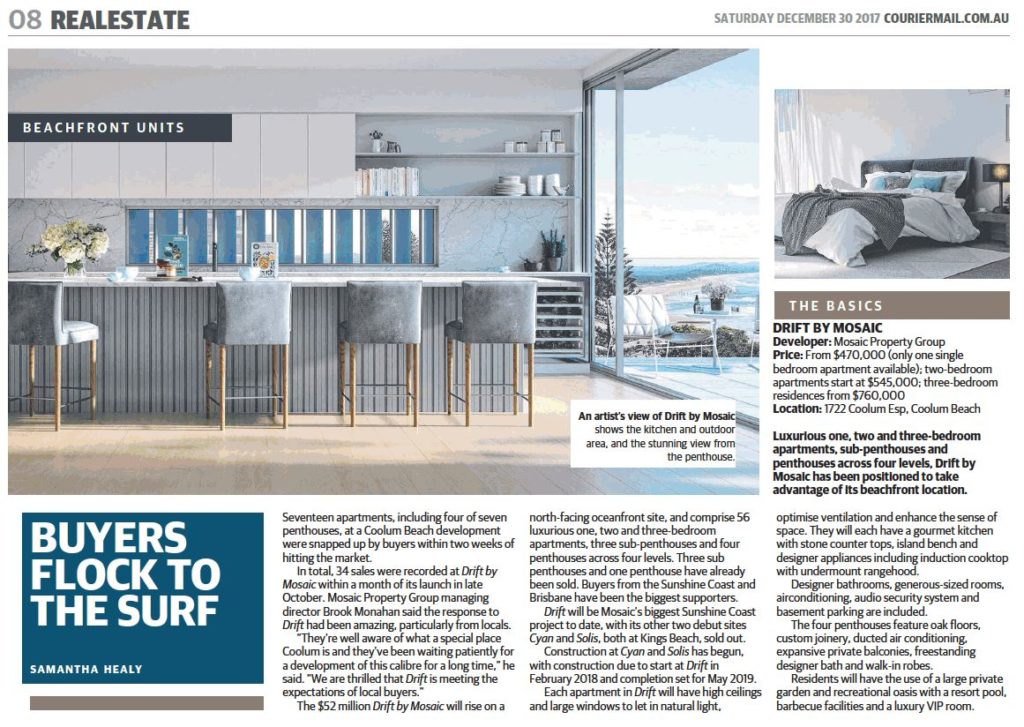