Smart investors will not look back in the next few years feeling disappointed, because they intuitively understand that now is the right time to get a foothold in the Brisbane and South-East Queensland real estate market. However, it’s only a matter of time before the wider mass market works this out, follows the pack mentality, increases the competitive environment and drives up values. The critical question now is probably whether people wish to feel wise and move in the circles of the smart investors, or wait for the wider mass market……it probably doesn’t warrant an answer!

Pick up any national press at the moment and the coverage regarding the Australian property market will be negative. This is to be expected given the Banking Royal Commission, plus the national market is typically only viewed through the lens of Sydney or Melbourne, which is currently pretty gloomy.

However, this can be very frustrating for those who reside outside of Sydney and Melbourne; for instance, Hobart has recently experienced strong residential price growth and the Brisbane market is showing greater signs that further growth is coming.

In relation to Brisbane, it is widely acknowledged that affordability and lifestyle drivers are currently better positioned than ever, but the sentiment around the Brisbane apartment market and future employment prospects often remain misunderstood.

On this basis, it’s an interesting exercise to talk to people currently on the ground who have experienced multiple property cycles in Brisbane and South-East Queensland, because their feedback is all very similar.

This feedback is universally along the lines that “sentiment is continually improving, baffled why this improvement is not evident in the data as yet, but remain intuitively confident that it’s not a matter of if the Brisbane market will grow……it is simply a matter of when”.

Based on the above behavioural observation, the factual market information presented below, and the knowledge that real estate cycles follow relatively predictable patterns; now is the time you want to be holding real estate in Brisbane and South-East Queensland. It is worth noting that we are not alone in this view, as the chart below indicates from the latest housing forecast report completed from CoreLogic-Moody’s released in June 2018. This report predicts Brisbane real estate values, which importantly also includes the apartment market, will return to positive values in 2019.

To add further context to this positive forecast for Brisbane, in April 2017, CoreLogic-Moody’s also predicted that Hobart would lead the country with regards to price growth in 2017, and this forecast well and truly came to fruition.

SQM Research recently reported its vacancy rate index for May 2018. In fact, these figures indicated that greater Brisbane’s vacancy rate was now at 2.9%, down from 3.5% the same time
last year.

Vacancy rates remain one of the best indicators to track the supply / demand equation in real estate markets.

Whilst there are still some challenges in very specific inner-city locations that consist of large volumes of high rise apartment stock targeted at investors, the wider market is not being as adversely impacted as many incorrectly perceive.

It could be hard to imagine but if these current trends continue, Sydney will have a higher residential vacancy rate than Brisbane in the not too distant future. 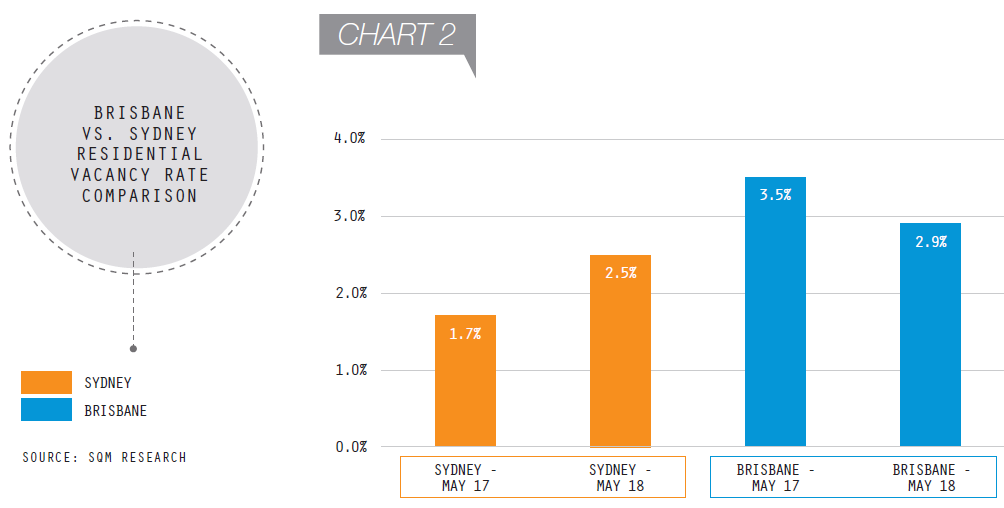 During the December 2017 quarter, approximately 7,730 people moved to Queensland from other locations in Australia; a significant portion coming from NSW.

This was the highest growth achieved since 2005 on a quarterly basis.

On an annualised basis, 22,500 people moved to Queensland for the year ending December 2017 – the highest growth achieved over the past decade.

To put this into perspective, Queensland has just exceeded Victoria in terms of recording the highest level of interstate migration nationally.

This surge in residents is currently being driven by affordability and lifestyle in Queensland compared to the southern states. It is equally important to note this positive migration to Queensland is forecast to continue given the strong upcoming infrastructure pipeline and subsequent improvement in employment opportunities. 3. Queensland/ Brisbane will attain a greater market share of national infrastructure investment; and the jobs will follow

The chart below from BIS Oxford Economics illustrates publicly funded transport infrastructure spending on projects of $2 billion or more in value.

However, the future looks somewhat different with levels of major infrastructure investment shifting to other areas of the nation, with Queensland being a significant recipient. The recently released Queensland State Budget 2018-2019 also highlights that $45.8 billion
is allocated to infrastructure and capital works, which represents the largest commitment since 2011. Specific reference is made in the budget to the $5.4 billion Cross-River Rail Project for Brisbane. This project will support an average of 1,500 jobs each year and up to 3,000 jobs at its peak and is just one example of a game changing infrastructure project proposed for Brisbane that will drive future job creation and economic prosperity.

Whilst this strong infrastructure investment pipeline is not yet reflected by an improvement in employment conditions or increased residential demand for Brisbane or South-East Queensland market sentiment and logic would strongly indicate this is now only a matter of time. Our in-house research team are continually delivering informative reports that can keep you up to date on market trends and fluctuations. Click here to find out more about why now is the time to invest in South East Queensland.