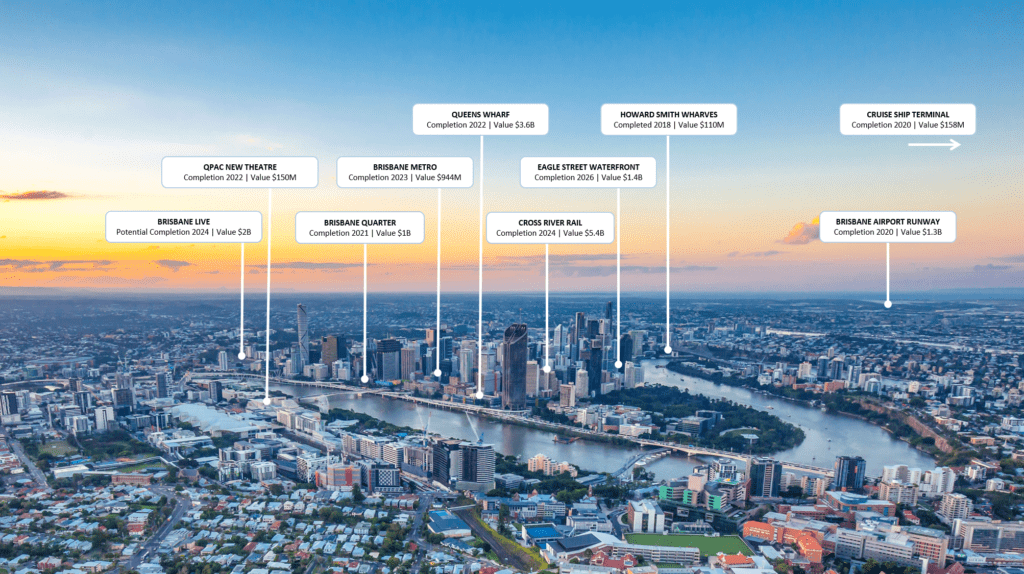 It is estimated that there are $7 billion worth of projects already underway in Brisbane, with a further $9 billion in the pipeline. This is game changing infrastructure growth for Queensland’s capital, which is already part of a $70 billion total infrastructure pipeline for Brisbane, Gold Coast and Sunshine Coast – the greatest concentrated infrastructure boom South East Queensland has experienced.

The Australian’s ‘The Deal‘ featured Brisbane in its 21 June 2019 edition. Showcasing Brisbane as an Australian capital city powerhouse, the feature highlights the unprecedented infrastructure spend as a game changer for locals and for those who have invested or looking to invest in property in the capital. In his interview, Australian Industry Group Queensland head, Shane Rodgers, states that the number of projects is good for business confidence in general, but some are genuinely transforming.

With such strong fundamentals in place, it’s no wonder that Brisbane property is now in extremely high demand with a property market set to lead the way with some of the best opportunities for investment in the nation.

Below is a snapshot of some of the new and transformational projects set to revitalise Brisbane in the next 5 years.

One of Brisbane’s most historical riverfront sites, the Howard Smith Wharves was redeveloped in 2018. The $110 million entertainment precinct is located right on the banks of the Brisbane river, and directly underneath the iconic Story Bridge. Consisting various restaurants, bars and event spaces, the site is also home to the newest Art-Series Hotel, The Fantauzzo, a 166 suite luxury hotel.

Queensland is Australia’s undisputed cruise capital with 520 ships porting in the last financial year 17/18. Completing in October 2020, the $158 million new international terminal is expected to handle over 1,100 vessels and 1.8 million passengers in the first 5 years of operation, contributing $1.3 billion in net expenditure. Some of the world’s largest and most opulent superliners have already booked their berths.

On track to complete in 2020, $1.3 billion ensures Brisbane will have the best runway system in Australia, doubling its current capacity. It’s estimated that by 2035 the new runway will contribute to 7,800 new jobs and an additional $5 billion in annual economic benefit.

A $1 billion world-class destination, the Brisbane Quarter is partially complete with the opening of The W Hotel in 2018 and new commercial, retail and residential scheduled for completion in 2021.

Brisbane’s highly anticipated $3.6 billion world-class integrated resort development is due for completion in 2022. Queens Wharf will transform the CBD and river’s edge with more than 26 hectares of entertainment destinations across land and water. Anticipated to attract 1.39 million additional tourists to Brisbane, it will feature cultural, retail, dining, hotel entertainment and tourist attraction spaces and is expected to create 8,000 jobs once fully operational.

Due for completion in 2022, this $150 million project will deliver a new 1,500 seat theatre to the Queensland Performing Arts Centre to help meet existing demands. Currently hosting over 1,300 performances annually, the new theatre offers the potential to host an additional 300,000 visitors annually.

The first stage of this $944 million public transport project is due for completion in 2023. A high capacity, high frequency network, the Brisbane Metro is a 21km service that will connect 18 dedicated stations along a busway of vital health, business and educational infrastructure, and assist to reduce peak hour traffic in and around the CBD.

Due for completion in 2024, the $5.4 billion Cross River Rail, is Brisbane’s turn-up-and-go public transport system. The new 10.2km rail line, includes 5.9km of tunnel under the Brisbane River and CBD, and connects major infrastructure hubs including The Gabba stadium, will speed up transport services, and help to ease congestion on major arterial roads.

With a potential completion date of 2024, Brisbane Live is a $2 billion entertainment arena project expected to bring big entertainment back into the CBD. With state-of-the-art facilities and technology, it will provide Brisbane with a world class facility for premium live events that is well connected to all transport networks.

Brisbane’s much loved Waterfront Precinct is planned to be revitalised which will transform the Eagle Street and surrounding area with a $1.4 billion leading premium business and lifestyle destination in 2026.

Brisbane is the new city of opportunity

New figures from the 2016 census confirm that Brisbane is following the same trajectory as Melbourne and Sydney in terms of the composition and distribution of the metropolitan area.

The fundamentals for SEQ remain strong and it has been cyclically ready for some time now. However, regulatory measures to control Sydney and Melbourne, combined with media reporting that has been mostly negative, has created a level of sentiment that has hampered the SEQ market from reaching its full potential.

Not all property, or the suburbs/zones they are built in, should be tarred with the same brush. There are some key metrics that should be considered when trying to recognise a healthy suburb for your investment.